Marion B. Steeg Award for Excellence in Jewish Education

Do you know an outstanding educator?  Someone who meaningfully imparts the treasures of Jewish life and Judaism?

Nominations are now being accepted for the Marion B. Steeg Award for Excellence in Jewish Education.

The only requirement is that a nominated educator must be involved with a group of Jewish students and/or Jewish learning community on a regular basis, meaningfully imparting the treasures of Jewish life.

Anyone can nominate an educator and the one-page nomination forms can be completed here. Completed nomination forms are due to Michelle Neal (michelle@jewishnola.com) by Tuesday,  June 30, 2020.

Once nominations are received each nominated educator is contacted to let them know they have been nominated and for them to complete a form with additional information illustrating their teaching methods, strategies, and why they do what they do.

The award is presented at a reception hosted by Robert and Pamela Steeg and is named in honor of Robert’s mother, a former educator.  The awardee will receive a gift of $1,000 towards future educational enrichment.

Dr. C. Reynold Verret, President of Xavier University was the keynote speaker at the May 2 event honoring Alysse Fuchs, the second annual awardee of the Marion B. Steeg – Harold Grinspoon Award for Excellence in Jewish Education. Dr. Verret spoke of the similarities between the African- American and Jewish communities, and the challenges faced in education.

Alysse Fuchs was nominated for the award by her supervisor at Avodah Jewish Service Corps, New Orleans, Dani Levine. Alysse’s passion for social justice and Jewish education impressed the Selection Committee, as well as the attendees at the reception. Alysse spoke eloquently and enthusiastically about her efforts to blend education and social action in her work as the Program Director at Avodah and as a previous religious school teacher at Touro Synagogue. The event was hosted in the home of Federation supporters Rob and Pamela Steeg.

The Marion B. Steeg – Harold Grinspoon Award for Excellence in Jewish Education is an award that highlights the value of Jewish education in its many varieties in our community. To be nominated, educators must be involved with a group of Jewish students and/or Jewish learning community on a regular basis, meaningfully imparting the treasures of Jewish life.

To learn more about the Marion B. Steeg - Harold Grinspoon Award for Excellence in Jewish Education, please click here. 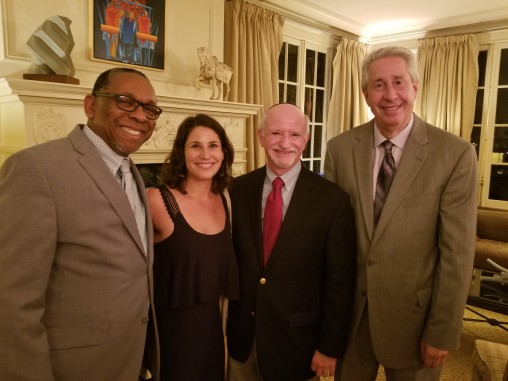